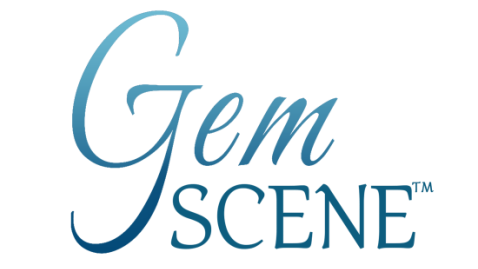 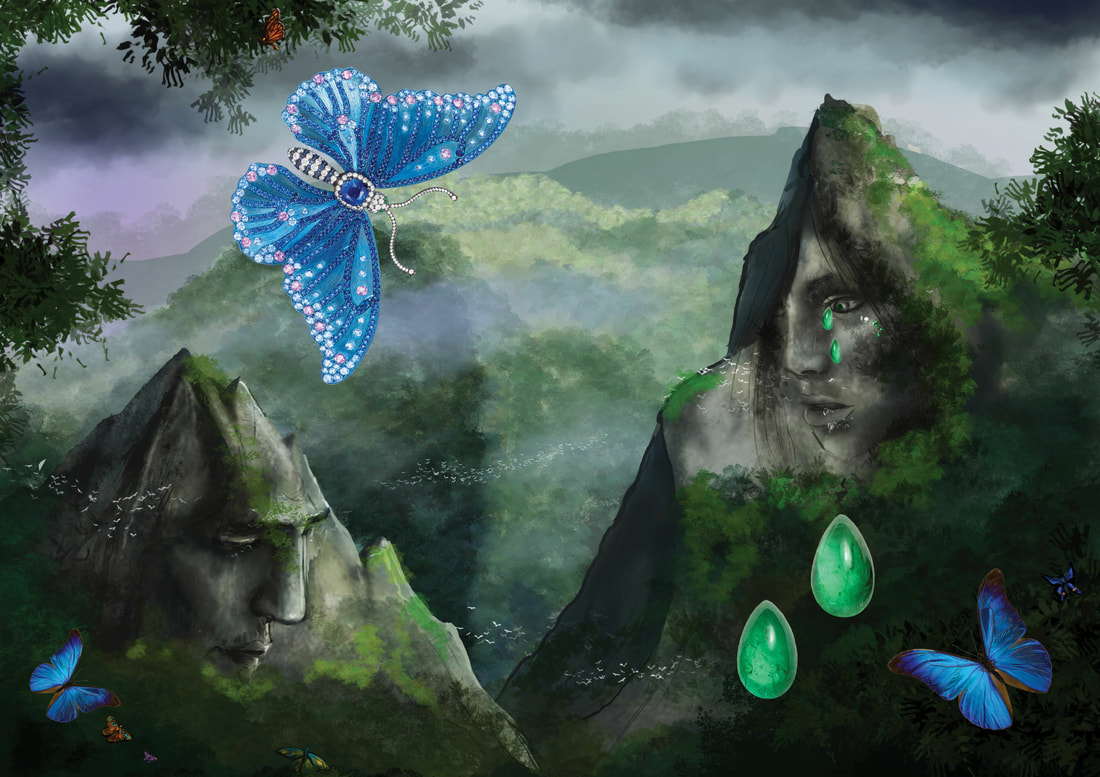 Stylized version of the mythic Tena and Fura cliffs, the symbolic guardians of the emerald region in western Boyacá. As legend has it, Fura’s tears turned into emeralds deep inside the mountain. (Original image is courtesy of Dawn Jehle, adornate.co.uk). Tear-shaped emerald drops by Lalta NYC. (Photo: Lalta NYC). Evoking the region’s famed blue Morpho butterflies, this bejeweled brooch, with antennas en tremblant, is made in titanium, sapphires and diamonds, by Ioannis Alexandris. (Photo: Ioannis Alexandris)

Having visited several of the major emerald mines in Colombia a few years ago, I was delighted to have been invited back recently to see new mines and revisit others. This time my visit was to three distinctly different operations in terms of  size, age and their "green" evolution.
By Cynthia Unninayar

A misty morning view as we enter Colombia's mining region.
​​Reviving the Iconic Coscuez Mine
Starting our mine visit in Bogotá, before even the dawn had cracked over Colombia’s capital city, I was among five other intrepid adventurers who set out on the five-hour trip to visit the iconic Coscuez Mine.
The first couple of hours were on highways, but when we entered the mining region in Boyacá, travel slowed to a snail’s pace. Our drivers skillfully maneuvered our 4x4s as they jostled over narrow bumpy dirt roads that zigzagged through the incredibly lush verdant jungle. As we travelled through the luxurious rainforest, it was like a scene out of the movie Avatar.
Coscuez is one of Colombia’s most iconic mines and has produced some of the world’s finest emeralds since its discovery in 1646. Over the centuries, it was mined in the traditional manner with no investment in geology, technology or infrastructure. The main tunnel ran along a slope from 896 meters at the La Paz entrance up to 1251 meters at its Sabore entrance. About 80% of the secondary tunnels in Coscuez have been closed or are inaccessible because of very high inside temperatures or other unsafe conditions.
In January 2018, the newly created company, Fura Gems—named after the famous cliff—purchased 76%  of Esmeracol, the previous owner of the Coscuez mine and holder of the Coscuez mining license that covers 0.47 square kilometers. Under the leadership of CEO Dev Shetty, Fura approached this new acquisition in a very scientific manner by making geological surveys and mapping existing tunnels.
In March 2018, Fura Gems began a bulk sampling stage, digging 25 kilometers of tunnels through 10,000 tons of rock. Two months later, it discovered an exceptional 25.97-carat gem, which it dubbed the “Are Emerald,” after the mythological god in the Fura and Tena legend.
Technical innovation and scientific understanding are only part of Fura Gems' approach. The company has also made major changes in the way the mine interacts with the local community. “We aim to set a new precedent for best practices in the gemstone industry,” explained Shetty, “by transforming current standards into the premiere example of an enterprise that is employee-friendly, sustainability-driven and community-centered.”
“In the 10 months since our acquisition of the Coscuez Mine, we have hired 270 local miners and committed to working with 70 local suppliers,” added Rosey Perkins, manager of new projects and communication. Among its community-oriented non-mine activities is support for a health clinic, bakery, sewing center, carpentry workshop and English lessons. And, because removing mine waste in a green environmentally friendly manner is important, Fura created a special washing plant that is run by women.
“We have received more than 95% positive feedback from the local population about our activities,” said Maria Angelica Castilla, head of Sustainability, adding that Fura’s all-inclusive approach relies upon good communication with the local residents and aligns with other emerald producers in the region that are also raising operational standards and prioritizing community development.
The Fura team clearly wants to restore Coscuez to its former glory, while being a “green” operation and a real partner with the community. 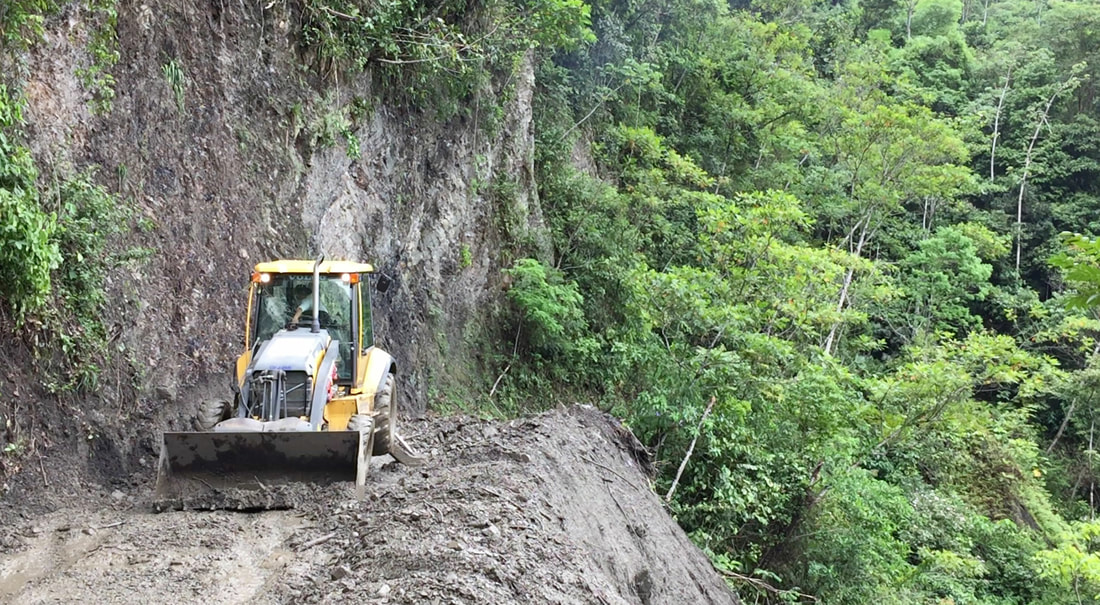 When literally stranded in the jungle during a severe storm that caused a landslide blocking the road out of the area, the manager of the Cunas Mine welcomed our group back to the camp to spend the night. The next morning, his crew cleared the road so we could continue back to Bogotá. (Photo: Lalta Keswani)
Cultural Stopover
The colonial town of Villa de Leyva was founded in 1572 by the first president of the New Kingdom of Granada, Andrés Díaz Venero de Leyva. Situated in a high-altitude valley of semi-desert terrain, with no apparent nearby mineral deposits, and far from major trade routes, Villa de Leyva has not changed much in the last 445+ years.
As a result, it has preserved its original colonial style and architecture, with many buildings dating to the 16th century. The 14,000-square-meter cobblestone central plaza is the largest square in Colombia and perhaps in South America. One of the nation’s main tourist attractions, it was declared a National Monument in 1954.
The small town is also one of the few anywhere to boast three paleontological museums. The valley is rich in fossils from the Paja Formation during the Cretaceous era (some 120 million years ago) and the museums abound with remarkable specimens. Probably the most spectacular is the fossil of a Kronosaurus boyacensis, an extinct genus of large marine reptiles. Discovered in 1977 by farmers in the area, the Kronosaurus was left in place and a building constructed around it. Measuring nearly 30 feet in length, it shares the museum with other remarkable fossils.
After a delightful brief night’s stay in Villa de Leyva, we returned to Bogotá, with fond memories of the warm hospitality we received at the mines where emeralds are definitely “green.”
(All photos by Cynthia Unninayar, unless otherwise specified.)